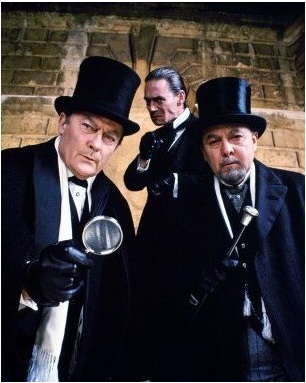 John Hillerman, best known as ‘Higgins’ on Magnum PI, passed away last week. The actor had a couple of Sherlockian ties.

The first was in the Magnum episode, Holmes is Where the Heart Is. Patrick MacNee (who himself played Watson three times and Holmes once) is David (nee, Sigerson), an old friend of Higgins. David thinks that he is Sherlock Holmes and he is out to foil a Moriarty plot. Higgins is forced to become a reluctant Watson. It’s a good episode.

Hillerman would play the real Watson a few years later opposite Edward Woodward’s Holmes in The Hands of a Murderer. That forgettable film was based on the script for The Prince of Crime, which was to be the third Ian Richardson Holmes film, before Sy Weintraub settled his lawsuit against Granada and packed up his project after two movies. (Richardson is just about my favorite Holmes).

Hillerman had a very Shakespearean voice and I would have loved to see him on stage, booming out the lines of Falstaff.