Can you identify the Sherlock Holmes story below? Don’t wrack your brain too hard: just read on.

“Any street in London is capable of offering an adventure in human travail,” observed Sherlock Holmes from the window at which he stood looking down into Baker Street. “It is extraordinary what a gamut of emotions the human face is capable of expressing.”

“A prospective client, I fancy. A woman in her middle thirties, obviously in a quandary, and quite agitated. Having come this far, she is no longer so certain that she wants to go all the way. She may have chosen unwisely; her trouble would appear to be martial, if I can be permitted a long shot.”

I came up beside him and looked down.

“Come, what do you say, Watson? You know my methods.”

A well-dressed woman walked up past the entrance to Number 221B, turned several doors away, and walked back, once again passing the entrance, and as before, glancing uncertainly at it. She appeared to be wringing her hands from time to time and was, clearly, as Holmes had said, in her middle thirties.

“A woman of more than modest means, though not necessarily wealthy,” I ventured.

A brief smile appeared on Holmes’ thin, eager face. “Elementary, my dear Watson. Would you not also say that she has not been too long married? Say – within three years?”

“Next you will be telling me she is having trouble with her mother-in-law who insists on spending five days of each week at her home,” I said, not without asperity.

“No, I daresay she could handle her mother-in-law or her husband in any ordinary difficulty,” replied Holmes tranquilly. “Her marital trouble is of some less common kind. Surely the ring she removes from her finger from time to time, clenching it in her fist, only to replace it, can be none other than her wedding ring? And if she has reached her middle thirties without the need of a private inquiry into her husband’s affairs, she would not be so agitated if she had been long married He paused, leaning forward until his high brow almost touched the pane. “Ah! She has made up her mind. She is coming in.”

In a few moments, Mrs. Hudson ushered our visitor into our quarters.

Okay, I misled you. You’ve just read the opening to The Adventure of the Perfect Husband, which can be found in The Memoirs of Solar Pons. I converted Parker, Pons, Praed Street and Mrs. Johnson to their Sherlockian counterparts. Now, “long shot” and “all the way” jump out at me as non-Doylean phrases, but otherwise, those passages scream, “Sherlock Holmes story!”

Solar Pons is the ‘Sherlock Holmes of Praed Street.’ He was created in 1928 by August Derleth when the author learned that Sir Arthur Conan Doyle did not intend to write any more Sherlock Holmes stories. Pons is very much like Holmes, often wearing an Inverness cape and deerstalker cap and frequently smoking pipes. Pons is a private detective who makes the brilliant seem, well, elementary. 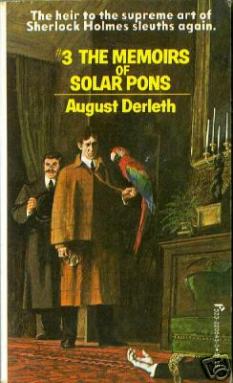 I’ve written before that Pons is more than just a carbon copy of Holmes; perhaps best explaining it in Why Solar Pons? But if you have read all sixty of Doyle’s Holmes tales and you want more of what you love about the world’s most famous professional consulting detective, there is no better place to turn than to August Derleth’s Solar Pons.

Great Sherlockians of yore such as Vincent Starrett, Anthony Boucher, Edgar Smith, Fritz Lieber and many more have sung the praises of Solar Pons. With even more Pons stories than are found in the Canon (plus Basil Copper’s authorized Pons pastiches), there is a treasure trove of Sherlockian-like delights out there. If you haven’t discovered August Derleth’s Solar Pons, you really should.

You can check out SolarPons.com, the only website dedicated to Solar Pons. And there’s a Facebook page for Pons as well.

2 thoughts on “Can You Name This Sherlock Holmes Story?”