So, when I say that Goldsborough’s first seven pastiches are good but not great, I am NOT damning with faint praise. I enjoyed them overall and he did a good job taking on one of the genre’s greatest characters. But then Goldsborough decided to stop writing about the Brownstone and its cast of characters. After almost a two decade hiatus, he took up Archie Goodwin’s pen again and has published four new novels since 2012, with the latest, Stop the Presses!, just coming out this month.

Sadly, these four new Wolfe books have not matched the standard he set with the first seven. Archie Meets Nero Wolfe (2012) relates the story that Stout referenced but never told, of their joining together. Frankly it was a disappointment and Charles E. Burns’ story, “Firecrackers,” is a better version of the tale.

Murder in the Ballpark (2014) followed and is about a shooting at a baseball game attended by Archie and Saul. Goldsborough still hadn’t regained his touch and the characterizations were just off. This one and the prior book are my two least favorite pastiches.

Archie in the Crosshairs (2015) sees someone focused on killing Archie as a way to get at Wolfe. It was better than the previous two books, but still not as good as the first seven. 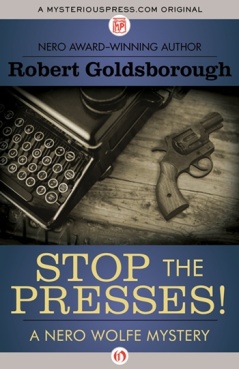 I just finished Stop the Presses!, book number four in the second series. It is the best of the new run. But to me, the problem is that it doesn’t feel like a pastiche of Stout’s books. It reads like a pastiche of Goldbsorough’s first seven books.

Several times, Wolfe criticizes Archie’s methods of getting guests to the brownstone. That doesn’t ring true. And Wolfe says that Inspector Cramer will “bring our old friend Sergeant Stebbins with him.”  That doesn’t sound right.

I re-read all seven of Goldsborough’s first series early in 2015 and this second series just doesn’t measure up. I’d guess that the 18 year layoff was simply too much to completely recapture that original feel.

I’d still rather read Goldsborough writing Wolfe than about 90% of the plethora of Holmes pastiches we’re inundated with. And I’m glad there are continuing to be new tales. But four books in, it’s just not the same.