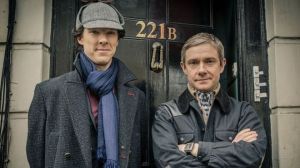 I do some of my best thinking while mowing the lawn. Last time around, the subject was BBC’s Sherlock. Which was one of my top five favorite shows after season two but isn’t even a top 10 favorite Holmes after season three.

Which has me thinking about what I liked so much in the first two seasons. For example, I loved all those Doyle references dropped in everywhere. They did a great job. But something else was scratching for attention. Then it came to the surface.

As a Christian, when reading the Bible, we’re supposed to ask, “Where is Jesus in this?” The Bible is the story of Jesus Christ. It should point to Jesus.

When watching Sherlock Holmes on screen, what if you ask yourself, “Where is Doyle?” Sure, you can reference a story name, or put in a plot point. But is Holmes really Holmes?

A lot of people decry Nigel Bruce’s Watson because he played the character as a bumbling buffoon. While that fits the comic sidekick role for movies, it is a poor portrayal of the good doctor as described by Arthur Conan Doyle. And while it certainly created a lasting image, it’s not a favorite among Holmes fans: especially as the nineteen forties fall further and further away in the rear view mirror. 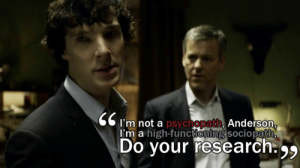 Which leads me to Benedict Cumberbatch’s Sherlock Holmes. He is certainly obnoxious and lacking in social skills, just as Doyle’s creation is. But I kept coming back to something. Early on, he is described as a psychopath. Cumberbatch’s Holmes retorts, “I’m not a psychopath, I’m a high functioning sociopath.”

This became one of the first catchphrases of the series, popping up on internet memes and t-shirts. It’s kind of a face of his Holmes. But does not that characterization take Cumberbatch’s Holmes as far from Doyle’s as Bruce’s Watson did?

Would you look at the Canon and say, “That Holmes, he’s a sociopath. A well-operating one, but still, a sociopath?”

You know what character I think of as a high functioning sociopath? Jack the Ripper. Not Sherlock Holmes.

Without decreasing the enjoyment I had in the first six episodes, I now lean towards Cumberbatch’s Holmes being more of a parody than a true depiction. I can watch Rathbone, Richardson, Cushing, Wilmer, Wontner and of course, Brett, and see Doyle’s detective. But a deep look at Cumberbatch and it’s hard to see. Not because it’s modern day London, but because they’ve moved the character away from Doyle.

Kevin Jackson of The Independent wrote, “Everything that he – Jeremy Brett – does, can ultimately be justified by chapter and line from Conan Doyle’s stories but he has taken liberties with the myth so confidently that he has, over the last decade, taken possession of it and displaced the literary Holmes. For me that is the hallmark of great acting; to illuminate a text in a way that he author could not have visualized.”

Is that what Benedict Cumberbatch, under the direction of Mark Gattis and Steven Moffat, has done? Or has the trio cast Doyle aside and created their own Holmes? Instead of illuminating the text, have they torn the page out and written their own?

I don’t know. I’m focusing on just one line, but I do think that line is pretty indicative of the character. There are other elements that I think do reflect Doyle’s Holmes, such as the bond of friendship between Holmes and Watson. 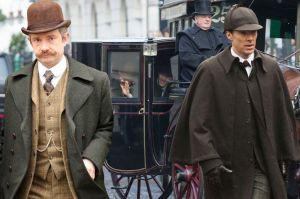 Now, I may LOVE the Victorian Era Christmas special, forget about season three and move Sherlock back up my list. I’m certainly hoping it goes that way. But I wonder if a critical view of Cumberbatch is going to put him in the category of not really Holmes (where I would put Johnny Lee Miller, who I enjoy watching).

If you’ve read Steven Moffat’s introduction to Alan Barnes’ Sherlock Holmes on Screen, you know he’s not interested in an authentic recreation of Holmes (he uses the word ‘insane’ in the same sentence as ‘authentic’ as a benchmark for Holmes films and movies). And he and Gattis prefer the doofus Watson to the more restrained one in the first two Rathbone films. That’s fine; I guess. But is his Holmes so far away from Doyle, that it’s not truly Holmes? 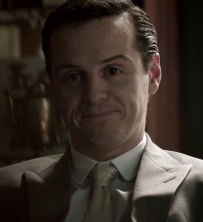 I find Freeman’s Watson to be far more Doyle than Bruce. On the other hand, making Mary Morstan an ex-CIA assassin was beyond goofy. As for Moriarty, they might as well have just pulled in a Bond villain: this one shares nothing more than the name with Doyle’s creation.

I’d like to hear from other folks on either side of the issue. I’m just sticking my toe into this particular pool and I don’t know what I think of the water yet. But I do think it might (or might not) be a valid assertion.