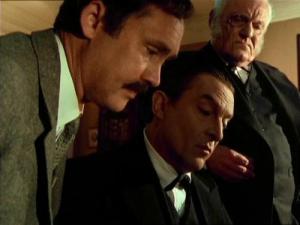 In 1994, the cast and crew were preparing to resume the Granada Sherlock Holmes franchise. June Wyndham Davies was expecting to make two more two hour features. With a poor choice of story selections remaining, she decided to introduce pastiches suitable for two hour episodes into the series. David Stuart Davies was writing his latest Holmes novel, the Book of the Dead, and with some drastic reworking, it was agreed that it would be the next entry in the Granada series. Then things unraveled.

Granada changed format again and wanted one-hour episodes. Davies’ proposal to film a two-parter of his story was rejected. Finally, Jeremy Brett, still disappointed with the public and critical reception of The Last Vampyre and The Eligible Bachelor, demanded that only Doyle’s original stories be used. June Wyndham Davies was forced to scramble for suitable scripts. The first filmed, but third aired, was The Golden Pince Nez.

Gary Hopkins made a fairly faithful adaptation. However, Edward Hardwicke was filming Shadowlands, starring Anthony Hopkins, and was unavailable. In a completely un-Canonical departure from Doyle, Mycroft (played well again by Charles Gray) accompanies Sherlock to Yoxley Old Place and fills in for Watson. To help fill up an hour time slot, a sub-plot involving women’s suffrage was introduced without changing the main plot. Also, Coram is killed in his bed at the very end; something that did not occur in Doyle’s story.

Brett does not appear quite as pale as he does in the latter episodes, but he bears almost no resemblance to the lean Holmes of years gone by and it grows increasingly more painful to watch him as the Memoirs go on. He also continued to add odd character enhancements to Holmes; usually involving yelling at someone. It’s quite possible a combination of his medications and his desire to find some new aspect of playing Holmes led to these odd choices. An erratic, bloated Brett, the absence of Watson and a second-tier story resulted in a weak offering.