Part of my Granada history for the Austin Sherlock Holmes society, I was looking at the four double-length installments. 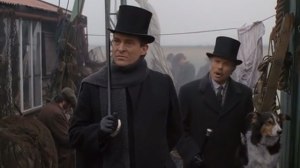 If The Master Blackmailer was the last hurrah for the Granada series, then The Last Vampyre was the beginning of the end. June Wyndham Davies was informed that a two-hour feature was needed quickly. Jeremy Paul agreed to write a screenplay in less than three weeks. He chose The Sussex Vampire and dramatically reworked the story. Much of the film was shot in Cotswald (not Sussex). With the significant changes in story and setting, a new title was needed and The Last Vampyre was chosen.

It can be argued that the main character in the episode is Stockton, suspected by the townspeople of being a vampire. If this sounds unfamiliar, that is because the character was created for the show and does not appear anywhere in the Canon.

Stockton adds a true element of the supernatural that is missing in the original story, though the odd scene where he seems to see a ghost is quite bizarre and could have been left out with no apparent loss. His choked words are nearly impossible to decipher, even after repeated viewings. He can kill with a glance, but dies when his carriage careens into a tree; a most un-vampire-like way to go. It is never definitively established whether he is a vampire or not.

The part of the vicar was originally offered to former Holmes Peter Cushing, but his health did not permit acceptance of the role. Cushing had appeared ancient as Holmes nine years previously in The Masks of Death. It’s possibly just as well that a frail Cushing and a bloated Brett did not share the screen.

Jeremy Brett was overweight and it showed. He struggled with the heat, as he insisted on only wearing black, believing it made him look slimmer. It scenes where he appears with the slender Stockton, it is clear that Brett no longer has that slim physique that made him such a great-looking Holmes. Unfortunately it would only get worse as his health declined.

There are elements of the story that actually make The Last Vampyre more interesting to watch than Doyle’s original tale was to read. However, it seems as if Jeremy Paul and Director Tim Sullivan were determined to work in as many vampire and gothic elements as they could and the one hour, forty-eight minute script wanders all over the place. The expository scene with the vicar and Holmes seems to drag on forever.

The Last Vampyre qualifies more as a pastiche than a Doyle adaptation. The positive elements are outweighed by the negative and the viewer is left with a spotty episode that is unlikely to be watched multiple times. Brett had little positive to say about the feature and was glad when the series returned to one-hour episodes, though the stories not yet filmed were among Doyle’s weakest.