MacDonald was a social commentator (critic, really) without peer among paperback fictioneers. This, from Judge Me Not: 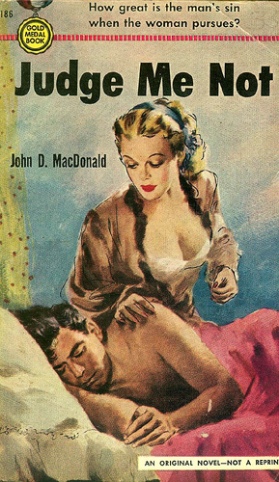 “The moralists talk about right and wrong, Mark.”

“It isn’t that simple. A man enters public life and he tells himself that he will do good. He will be effective and the people will benefit. It is idealism of a respectable variety. And then he discovers that he must make certain compromises in order to achieve the good. Like a man who build a house. To afford the roof, he must order cheaper windows. To afford a fireplace, he must skimp on the foundation. The house no longer satisfies him as much as it did, but he tells himself that without the short cuts, there would be no house at all.

“But in public life, each compromise makes the next compromise easier, and each move toward good makes the next move more difficult. It is a miserable equation to live with. Yet the man goes on, and he tells himself that if you take the total good, and subtract the total evil, the net result is good. He drifts along, clutching the illusion, until one day he adds it up and he discovers that evil outbalances good. And he never knows the precise point where the balance changed, nor does he know which specific compromise was the wrong one.”

THAT is  a keen look into human nature. I received my Masters in Public Administration 1991. I had started working in the public sector in 1989 and have now been in the public and nonprofit world for twenty-five straight years. I have seen people who know better, or who should know better, make these compromises, I still see it today and I will keep seeing it until I retire from public service. What MacDonald wrote in 1951 is still true in 2014.

I myself talked about this concept in a missive I wrote regarding resisting temptation:

The man at work does not plan to cover up a crime. But he knows that his boss doesn’t like being told certain types of things.  He sees something wrong. Not illegal, but not right. His workplace environment encourages people to see gray instead of black and white. And  black and white means wrong and right.

So he just ignores it. The devil whispers in his ear “It’s a little thing. Just go along and it’s all good. Nobody likes a trouble maker.” Well, it is a little more ‘not right’ the next time. But it is still something that could make his work life uncomfortable, so he doesn’t say anything.

Another little step. A few more steps down the line and the inspectors find that a law or regulation has been broken. It is not something that sends people to jail, but it does  require an investigation and some explanation. And the man cannot quite put into words why he never told anybody his concerns about what was going on.

Hey: my writing has something in common with John MacDonald!!!!

I recall this being at the heart of Robert Ludlum’s Trevayne, which he wrote while immersed in the disillusionment of Watergate. Trivia: that book came out under Ludlum’s pen name, Jonathan Ryder.

Judge Me Not is about a couple of honest men trying to clean up a corrupt town. It’s an updated (for the nineteen fifties) version of Dashiell Hammett’s Red Harvest (a must read). Much of the book still feels current: sad to say, including the sex trafficking. I think it’s in the top half of his library.

4 thoughts on “John D. MacDonald – ‘The selling of a politician’s self’ from Judge Me Not”