I’m not only a Holmes fan, but also of hard boiled/noir/pulp/crime. Almost Human is more sci-fi noir than anything else on tv today.

Here’s a trailer for the opening credits, which (I think) works.

So, Almost Human wrapped up its thirteen-episode debut season. This is a buddy cop show with a sc-fi setting (takes place in 2048). Michael Ealy is a human-like robot paired with Karl Urban (McCoy in the new Star Trek films). The lovely Minka Kelly costars, as does MacKenzie Crook (Gareth in the British ‘Office’). Star Trek’s J.J. Abrams is exec producer.

This is a cool series, with technology incorporated into the story lines and some visuals very reminiscent of ‘Blade Runner’ (one of my favorite films). There’s an over-arching story line related to Urban’s character being betrayed by his girlfriend, resulting in the death of his partner. Ealy is very good at conveying things without speaking and Urban gets to expand beyond his wooden McCoy persona. 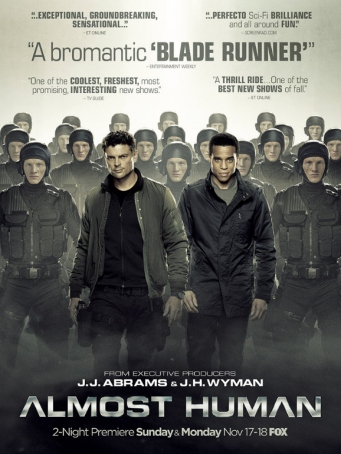 A central part of the show is that Ealy is ‘almost human.’ His robot line was shelved and he was later re-activated. A “better” robot was put in service to replace his type: they all look alike and are clearly robots. This poster highlights that distinction.

The ratings have been good (not bad, not great), but Fox hasn’t given a renewal, and they are yanking it from its time slot for Bones. Signs are that Fox is giving up on this one. We can add it to Fox’s cluelessness in cancelling other ‘off the beaten path’ shows ‘The Adventures of Brisco County Jr’ and ‘Firefly’ after one season.

So, I liked The ‘Good Guys’ (Bradley Whitford and Colin Hanks) in 2010. And loved ‘Common Law’ (Michael Ealy and Warren Kole) in 2012. Now ‘Almost Human’ is on the chopping block. STOP CANCELLING NEW BUDDY COP SHOWS AFTER ONE YEAR!!!!!

4/30/14 – Alas: word is out that Almost Human won’t be picked up for a second year. Like Fox couldn’t drop some of the junk they have on and kept this one.